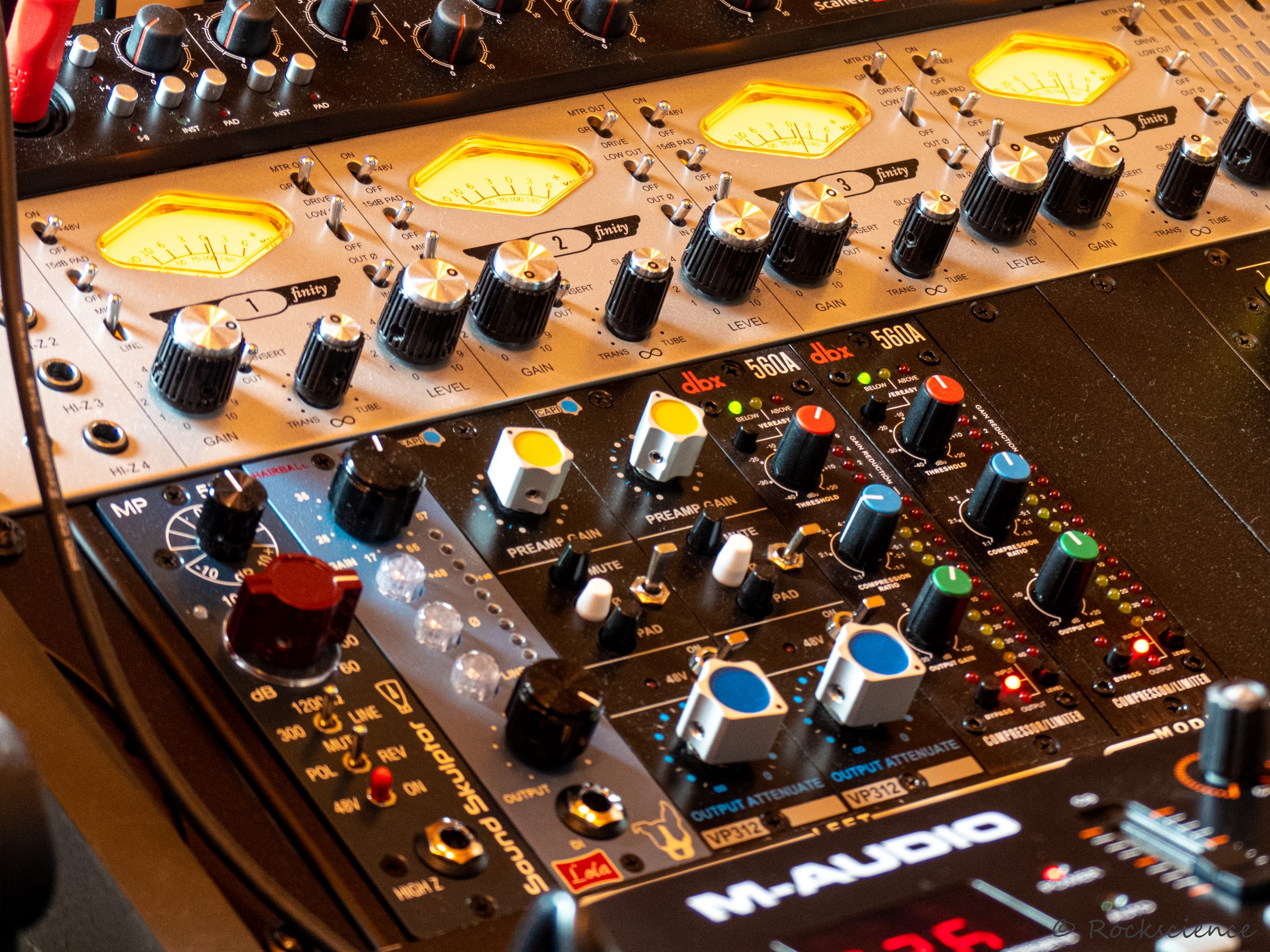 Here’s the whole story of how I started out in upstate NY (Binghamton) with big dreams of being music power player and ended up in Newport Rhode Island running my little Software Development consultancy, a recording studio and doing some cool microphone mods

Neo-Sync Labs as it was called then was my studio in my home outside of Binghamton, NY. The studio was centered around an extended (and heavily modified) Studiomaster Console and a Tascam MS-16 1 inch recorder. When you walked into the control room, you immediately noticed the UREI 809 Studio monitors (driven by a McIntosh MC2200). There were two isolated tracking rooms, headphone distributions, and all the fancy real studio stuff. Trying to be ahead of the curve, I acquired a very early, very limited (and very expensive) Pro Tools system. The hard drive was a 1GB external monster that cost $1200 at the time (By comparison, I recently bought two 4TB drives for $119/ea).

Entering the digital age, NSL later traded up from the MS-16 analog tape deck to three Fostex ADATs. We now had 24 tracks! (and still the ancient Pro tools rig).

Another innovation at NSL was Mixing Automation. I had three Steinberg Niche midi-controlled gain units wired into the Studiomaster Console. My own software (which I named Muse) drove the whole thing. While not doing sessions, I was working on Muse which I was quite sure was going to make me rich. Every once in a while, I look at the source code – it’s not so bad.

In ’98, I reclocated to the Boston Suburbs. The studio sat mostly dormant but slowly came to life over the next few years. Still based on the old ADATs and large Studiomaster console.

In early 2000, I was chatting with one of my colleagues at work and knowing I was a musician and interested in technology, he said “why don’t you just work at Cakewalk?”. At the time, I had no idea where Cakewalk was located (I figured California for some reason) and he said “They’re right over in Cambridge”. I went to the careers page, applied for an opening and after a few interviews, I had a job offer. Not just any job but my dream job! I remember how at first, whenever I heard someone walking down the cubical aisle, I would think “stop screwing around writing music software – look busy!” And then I would remember that screwing around writing music software was exactly what I was supposed to be doing! It was too good to be true… until it wasn’t.

The first product I worked on was “Guitar Tracks” – basically a cut-down version of Pro Audio that was more or less a virtual porta-studio. It was one of the “baby products” as we call them which were fenced down versions of the flagship. It always amused me at how much work we would to disable features to make these cheaper offshoot products. While I was working on that, the Pro Audio core team was working on what would be the first version of SONAR (Pro Audio rebranded). When GT Finished, I immediately got sucked into the core team on SONAR and I worked almost exclusively on SONAR until I left in 2009 – with one six month period where I worked on the ill-fated “Project 5”. After that little experiment, it was back to SONAR full time.

About six years in, my boss – the VP of engineering left the company. It was a huge shock to everyone and a huge loss of talent. After the announcement meeting, he took me aside and said “I told Greg that I think you should take over” – “you” as in me. WTF???!!! One thing led to another and I found myself as “Director of Engineering” and here is where it all went south. It went from dream job to nightmare in a big hurry. I was terrible at the job and that made me miserable. And I was so miserable, that it made me terrible at the job. I was still coding full time, but now was pulled into this world of management and leadership that I had absolutely no business being in. I started in training myself in earnest in enterprise technology stacks so that could hopefully find a way out. I was coming home from work exhausted, and self-teaching/practicing these new techs until late at night. It was exhausting but it eventually got me out into the enterprise world where I still happily work today. I haven’t touched Visual Studio C++ since and I don’t miss it one bit.

In 2006, I moved to Arlington, MA (another Boston Suburb). This house had an awesome unfinished space on the third floor which made a beautiful large one-room Studio.  By now, computers were definitely fast enough to handle large sessions and disk drives were cheap enough to store all that noise. This is where I decided to call the thing RockScience.

In this studio, I acutally got back into recording. Mostly for myself but I also took a few projects. It was getting fun again. Eventually, the big UREI 809 monitors went away and I got a beautiful set of Focal Solo Be monitors.

2015 Let’s Sell Everything and Go Sailing

In the background of all this, my partner and I were becoming avid sailors. Her and I began talking about going on a serious adventure. Ultimately, we sold our 3000 sq ft house and moved onto our 300 sq foot Sailboat Argon. In September 2016, we left Boston and kept going south until we got the Caribbean where we spent that whole winter. I continued working part-time-ish during that.

On the way back home the next summer, we happened upon a very cool house in Newport, RI. Offer made and accepted and we had a land home again! And of course it has a beautiful studio space!

So, here we are in the latest setup in Newport. The studio has been mostly packed up in storage for the last couple years while we lived on and sailed our sailboat all over the place.  The new place is great with high, peaked wooden ceilings and lots of light. I’ve got a main room with the gear plus access to other spaces in the house with incredible acoustics.

I’ve stretched out my software arsenal in the new studio as well. Although there will always be a soft spot in my heart for Cakewalk and I still belive it is an amazing tool, I’ve started using other tools as well including Ableton Live and Pro Tools.

In 2020, I started getting into DIY projects, building many microphone and mic preamp kits for the studio. As my interest and curiosity grew, I’ve slowly built up what I like to call the Custom Shop. I do Microphone Mods and and Custom Microphone Builds as part of this endeavor.

To my microphone customers: I will be unable to fulfill orders between July 20, 2022 and August 22, 2022. The website will be up and you can browse and place orders. I will continue to respond to questions quickly. But I will not be able to build, package or ship anything within those dates. Sorry for the inconvenience! Dismiss